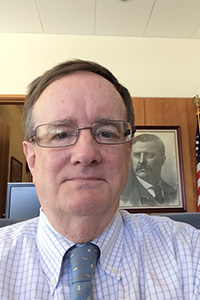 Judge Alley is a retired bankruptcy judge, having served in the District of Oregon from 1995-2016.  He is currently acting as a recalled judge.  At Oregon Law he is an instructor in Real Estate Transactions.   He received his BA in History from Wesleyan University, and his JD from the University of Puget Sound (now Seattle University).  From 1977-1995 he was in private practice in Medford, Oregon.   He is a former member of the Board of Governors of the Oregon State Bar, and of the Executive Committee of the Bar’s Debtor-Creditor Section.  He has also served on the Bar’s Committees of Judicial Administration and Professionalism, and on the Jackson County Planning Commission.  While on the bench Judge Alley has served on the 9th Circuit Information Technology Committee, and on the Ninth Circuit Conference of Chief Bankruptcy Judges, which he chaired in 2014-15.  He has been on the faculty of numerous CLE activities, including the annual Northwest Bankrutpcy Institute, and taught Bankruptcy Law at Willamette University School of Law.  In 2015 he received the Debtor-Creditor Section’s Award of Merit.

In 2001 Judge Alley authored The Continuing Adventures of Code §523(a)(15), an article included in Norton’s Annual Survey of Bankruptcy Law (2001).  Shortly thereafter Congress enacted significant amendments to the section which rendered the article wholly obsolete.

While on the bench Judge Alley has authored approximately 150 reported (published and unpublished) opinions.  Some may qualify as scholarly.