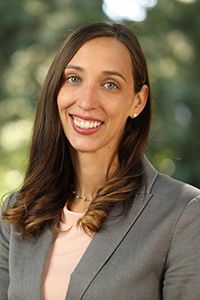 Kasia grew up in Hillsboro, Oregon. She attended the University of Redlands in California and graduated in 2008 with a Bachelor of Science in Global Business. After graduation Kasia spent several months doing volunteer work in Ecuador. Upon her return to Oregon she interned with Catholic Charities Immigration Legal Services, assisting survivors of domestic violence in filing immigration petitions.

Kasia moved to Eugene in 2010 to attend the University of Oregon School of Law. During law school, Kasia volunteered at Lane County Victim Services and participated in the Domestic Violence Clinic. She also spent a year as a Certified Law Student at the Washington County District Attorney’s Office.  Kasia graduated law school and was admitted to the Oregon State Bar in 2013.

Before joining the Domestic Violence Clinic as an attorney, Kasia clerked for the Honorable Charles Zennaché at the Lane County Circuit Court.