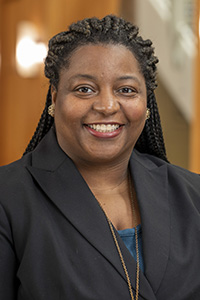 As a 2017 AmeriCorps Equal Justice Works Fellow, she was responsible for establishing, coordinating, and expanding SULC's disaster law clinic. The clinic's focus is helping low-income individuals who have been affected by natural or man-made disasters with civil legal issues.

Professor Nixon-Jones is a member of the Disaster Housing Recovery Coalition and is currently a certified business coach and a national SCORE mentor. She also serves on the Association of Legal Writing Directors' members committee and the Legal Writing Institute's diversity committee.

Growth and Mindset for a Generation As A Profession, The Journal of Legal Writing Institute, Volume 23 (Spring 2019).