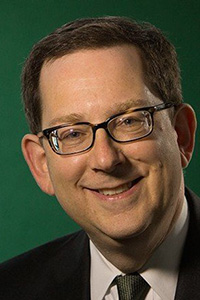 Michael H. Schill is the 18th president of the University of Oregon and holds a tenured faculty position in the UO School of Law.  He began his tenure on July 1, 2015. He previously served as the dean and Harry N. Wyatt Professor of Law at the University of Chicago Law School.

A nationally recognized expert in property, real estate, and housing law and policy, Schill is the author or co-author of three books and more than 40 scholarly articles. His work includes studies of the determinants of value in condominium and cooperative housing, the impacts of housing programs on property values, the enforcement of Fair Housing laws, mortgage securitization, and the deregulation of housing markets. His casebook, Property, co-authored with James Krier, Greg Alexander, and Lior Strahilevitz is one of the best-selling casebooks used in American law schools.

In 2004, Schill founded the Furman Center for Real Estate and Urban Policy at New York University. Under his and subsequent leadership, the Furman Center has become one of the nation’s leading research centers on housing and the built environment.

Schill graduated with an AB in public policy from Princeton University in 1980 and a JD from the Yale Law School in 1984.