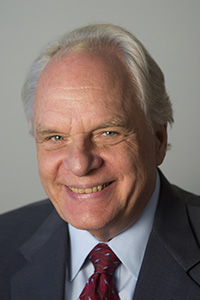 Roger Saydack has been a business lawyer since 1980.  He was a founding member of the Arnold Gallagher law firm in Eugene where his practice emphasized business law, business transactions, business planning, real estate law and health care law.  His clients ranged from the largest privately held companies in Oregon to start-up ventures, as well as hospital and health care systems, medical groups, physicians, business owners and entrepreneurs. He has been listed in Best Lawyers in America since 1993 and holds the highest rating for professional quality and integrity from the Martindale-Hubbell Law Directory.

After practicing law for 26 years, Roger joined the Oregon Executive Team of PeaceHealth, a non-profit health care system, where he served first as Vice President for Legal Affairs and Business Transactions, later as Vice President for Strategy, Innovation and Development and then as Chief Operating Officer and Administrator of Sacred Heart Medical Center at RiverBend.  He returned to his law practice at Arnold Gallagher in 2013 where he was of counsel until he retired from the firm in 2018.

Roger is currently a member of the Boards of Directors of PacificSource Health Plan, Pacific Health Association and the Boards of several family-owned businesses.  Among his civic activities, he has served on the Boards of Directors of PeaceHealth, the Oregon Region of PeaceHealth, Lane Transit District, Trillium Collaborative Care Organization and a number of community and national non-profit Boards. He has been nationally recognized for his leadership of Music Director Searches for the Eugene Symphony Orchestra and his work with orchestras around the country.  In recognition of his business and civic service, Roger was honored by the Eugene Area Chamber of Commerce as Eugene's First Citizen. He writes and lectures about the visual arts and music, is an avid gardener and fly fisher and a doting grandfather.

Roger taught the Business Planning seminar at Oregon Law from 1989 until 2009, the Sales course in the 2016 Fall Semester and Contract Drafting in the 2017 and 2018 Spring Semesters.

Roger received his J.D. from the University of Oregon School of Law.