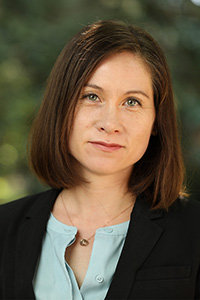 Professor Tippett’s research examines employment practices, consumer decision-making, and the intersection of law and technology.  Her research has been published in the Minnesota Law Review, the Yale Journal of Law and Technology, the Berkeley Journal of Labor and Employment Law, and the American Business Law Journal, among others, with forthcoming work to appear in the Arizona Law Review and Texas Law Review.  She is currently working on a monograph about the history of employment law, under contract with the University of California Press.

Before joining the faculty, Professor Tippett practiced employment law at the Silicon Valley based law firm, Wilson Sonsini Goodrich & Rosati.  Professor Tippett graduated from Harvard Law School in 2006 and Harvard College in 2002.  As a student, she spent several years working for the late Professor Roger Fisher, co-author of 'Getting to Yes.'

Harassment and Employment Discrimination Research.  Professor Tippett’s writing explores the relationship between anti-harassment law and the broader goal of providing equal employment opportunity.  Her articles have examined the legal implications of the #MeToo movement, the content of harassment trainings, and how employers can improve processes for distributing employment opportunities.  In 2018, Professor Tippett testified before the Equal Employment Opportunity Commission and its Select Task Force on the Study of Harassment in the Workplace.

Professor Tippett is a co-author of the Fifth Edition of the West Academic textbook, Employment Discrimination & Employment Law: The Field as Practiced, along with Samuel Estreicher & Michael Harper.  Professor Tippett's previous work examining the Supreme Court's decision in Dukes v. Wal-Mart was cited in two decisions by the United States Court of Appeals and the Iowa Supreme Court.  In 2018, she received the Michael J. Zimmer Memorial Award for rising scholars in labor and employment law.

Law and Technology Research. A recent collaboration with researchers at Georgia State University and MITRE explored whether summary judgment rulings in employment cases could be predicted using machine learning techniques.  In prior research, Professor Tippett examined software-based wage theft, terms of service contracts in the gig economy, and broader trends in technology-based non-compliance with employment law.

Consumer Decision-making.  Professor Tippett also studies drug injury advertisements, which recruit consumers for lawsuits against pharmaceutical companies.  In 2017, Tippett testified before a subcommittee of the House Judiciary Committee about how these ads may affect patient decision-making.  Her research on drug injury advertising has appeared in the Food and Drug Law Journal, Urology, the American Journal of Law and Medicine, Drug Safety, and the Yale Journal of Health Policy, Law and Ethics.

Public Engagement.  Her writing for The Conversation has been republished in the Washington Post, the Huffington Post, The New Republic, Newsweek, Fast Company, Salon, the LA Times, the Chicago Tribune, Quartz, and the Daily Beast, among others.  She has also written for Fortune and the Harvard Business Review.   Professor Tippett has been interviewed on National Public Radio, the BBC, and CBC.