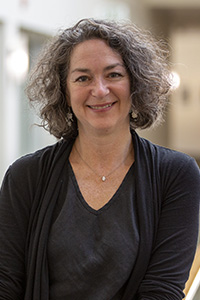 After law school, Professor Weiner clerked for Chief Justice Jay Rabinowitz of the Alaska Supreme Court. She was awarded a Women's Law & Public Policy Fellowship, which allowed her to supervise law students in the Sex Discrimination Clinic at Georgetown University Law Center. She also practiced securities litigation with Sherman & Sterling in the firm's San Francisco office from 1992-1995. Professor Weiner began teaching at the University of Iowa College of Law, where she taught Family Law, Family Law in the World Community, and Domestic Abuse Law. Professor Weiner is admitted to practice law in Maryland, the District of Columbia, Oregon, and California.

Professor Weiner was the founder and faculty director of the UO's Domestic Violence Clinic. For twenty years, she ensured the clinic's existence by keeping the clinic funded with her grant writing and other fundraising efforts.

Professor Weiner has written extensively in the areas of family law, gender-based violence law, and international family law. She is considered an expert on the Hague Convention on the Civil Aspects of International Child Abduction. She co-wrote the first US casebook on international and comparative family law, entitled Family Law in the World Community, which is now in its third edition. Professor Weiner's book entitled A Parent-Partner Status for American Family Law, published by Cambridge University Press in 2015, argues that society should structure family law differently and create a legal status for two people who have a child in common.  More information about that book, and the underlying concept, can be found at www.parent-partners.com. Professor Weiner has also focused on Title IX.  Her article, Legal Counsel for Survivors of Campus Sexual Violence, was published by the Yale Journal of Law and Feminism in 2017. Her article, A Principled and Legal Approach to Title IX Reporting, was published by the Tennessee Law Review the same year.  Her last article, entitled Civil Recourse Insurance, proposes a new insurance product that would help survivors of gender-based violence access the tort system.