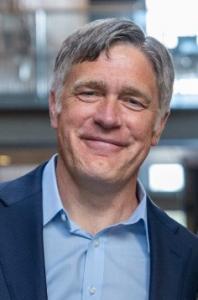 Professor Lininger grew up in Southern Oregon. He earned his undergraduate degree at Yale, and his law degree at Harvard. He has worked as a federal prosecutor, as counsel to a subcommittee in the U.S. Senate, and as a litigation attorney with the law firm Skadden, Arps, Slate, Meagher and Flom in San Francisco. Lininger joined the UO faculty in 2003.

Lininger’s research has also focused on the intersection of environmental law, ethics, and criminal procedure. As a former prosecutor of environmental crime and a plaintiff’s attorney who sued polluters, Lininger is interested in customizing ethical and procedural rules for the unique context of environmental advocacy. Lininger has served on the state board of directors for the Oregon Natural Resources Council. He has been an ethics advisor for the Sustainable Future Section of the Oregon Bar, and a member of the Ethics Committee for the American Bar Association’s Section on Environment, Energy and Resources. Lininger has recently presented his environmental scholarship at Yale, Stanford, Columbia, NYU, Texas, Vanderbilt, Washington, Utah, and SMU, as well as at conferences sponsored by the National Science Foundation and the American Bar Association. In 2018, a panel of judges at Vanderbilt Law School and the Environmental Law Institute selected Lininger’s article “Green Ethics for Judges” as one of the top five articles among more than 300 environmental law articles published over the prior year.

Lininger’s latest scholarship has advocated revisions to ethical and evidentiary codes in order to promote access to justice and ensure fair treatment of indigent parties in court.  Lininger has received invitations to present on this subject at conferences, symposia and colloquia hosted by Berkeley, Georgetown, UCLA, Fordham, and Northeastern (although the COVID-19 pandemic necessitated that organizers postpone or cancel some of these presentations). In 2021, Lininger received a Consumer Protection Research Grant for a project exploring whether revisions to evidentiary rules would improve the protection of low-income and minority consumers.

The University of Oregon has given Lininger awards for teaching, scholarship and service.  In 2006, Lininger received the Ersted Award for Distinguished Teaching. In 2008, he received the Lokey Award for Faculty Excellence. In 2010, he won the Hollis Teaching Award.  In 2017, he received “Pillar of the Community” Award. The graduating class has selected Lininger as commencement marshal in eight years, most recently in 2021.

THE NEW WIGMORE:  VOLUME ON IMPEACHMENT AND REHABILITATION (with Roger Park) -- published by Aspen/Wolters in 2012; supplements published every year since 2013

No Privilege to Pollute:  Expanding the Crime-Fraud Exception to the Attorney-Client Privilege, 105 MINNESOTA LAW REVIEW 113 (2020)

The Promise and Limitations of Forensic Linguistics, 92 CORNELL LAW REVIEW 833 (2007)

Kids Say the Darndest Things:  The Prosecutorial Use of Hearsay Statements by Children, 82 INDIANA LAW JOURNAL 999 (2007)